UKSN Community Uncovered - To Everest and Back With Matt Goslin

To Everest and Back

On Monday 28th January 2019 I arrived at work, my long-standing friend, colleague, business and mountaineering partner Dave was already there with a card and a bottle of wine to wish me a happy birthday. As the morning passed he asked me how I felt reaching the mile stone of 50 and was I being subdued because I had, had a hell of a weekend celebrating, I broke the news to gently and reassured him that for such a land mark birthday I would have been certain to invite him to the celebrations and that I was actually 49, but reassured him he had got the date right at least.

After the joking has passed he asked me if I had thought of anything I would like to do for my 50th and I confessed that I was probably going to try and dodge the fuss by going away, somewhere remote, like Everest, by lunchtime we had the trip planned and booked!! This wasn’t unusual, Dave and I have been on many adventures over the years, he is a retired Royal Marine and I am a MLTB Mountain Leader and doing something like this is par for the course, we were over due an adventure our last was summer 2018 when we walked and wild camped from the southern tip of the Hebrides, Vatersay, to the northern most tip, the Butt of Lewis. We also agreed to do it in winter would be the better option as it would be quieter and whiter.

Training began independently to begin with and it wasn’t long before I was hitting a 25 km training route along local forest trails twice a week, at the end of August we trained together, Friday afternoon we would travel to the Mountain Centre in Manchester and do an hours hypoxic training and then drive to Llanberis, we would climb Snowdon and make it back to the hotel for the last meal order, have a few jars, a 4.30 breakfast and do it over again hoping to be home for lunchtime. We hoped this would maximise our time with our families at the weekend and give us two hard resilience training sessions, and boy did it take some effort to get up for the second ascent, first ascent time was quickly down to two hours, with the round circuit from Victoria Hotel car park and back taking 4 hours with the next mornings circuit taking 5.

In November we moved to the Lake District for training and had a 25km route that took in all the summits in the Coniston range, again twice back to back every Friday night, Saturday morning.We made conscious decisions on two counts, firstly we were only going to Base Camp and not to the summit, after all it was supposed to be a holiday, secondly we weren’t going to raise any money, this we justified in that our day jobs were spent running voluntary and charitable initiatives for disadvantaged children and young people in the UK and EU and we didn’t want the pressure of fundraising to cloud our thinking.

Our departure date was 8th February and we were convinced CV19 restrictions were either going to force a postponement (which we didn’t want, we didn’t want to be part of the 5000 strong train of people who go to Base Camp in May/June) or we would surely get stuck in Nepal unable to re enter the UK or going into quarantine for 2 weeks, as luck would have it neither of these things happened and we got there and back without any issues. Well I say that – we both got Khumbu Cough and it wasn’t great coming back the UK with a dry, rasping, rib breaking cough!!

The trip itself needs putting into some context, Kathmandu sits at an altitude of 1400m, higher than anywhere in the UK, then you fly to Lukla which is at an altitude of 2860m, doubling the altitude again and still leaving 2500m of ascent to go and a distance of 130km (Fort William to the summit of Ben Nevis is 6.5km) which has to be broken to allow for acclimatisation, the Sagarmatha National Park is vast, almost beyond comprehension).

The decision to go in February had its pro’s, we were in a group of 6, two of these being our guides, we counted 8 more walkers on the whole 9 days journey and there were 6 inhabitants at EBC, we were in many cases the only people in the hostels. There is a good reason for this, as soon as the Yak Burner went out at 9pm by 9.30 it would be below freezing indoors, our rooms would regularly fall to -10c during the night and many daytime temperatures in the shadows would be equally as cold. It was ok in the direct sunlight, which we sought out every waking second. We were incredibly lucky in there was virtually no wind chill for the entirety of our stay, which was a blessing as we both felt the full effects off the altitude AMS (Acute Mountain Sickness) hit us both, and hit us both hard.

Up to Namche (3000+m) we were fine, 4000m seemed to come and go as well and we were fine for our night lodge in the Everest View Hotel, 4500m wow, boy that was a threshold I will cross again with care. The last 3 days climbing were just relentlessly awful every step forward just sapped all our strength, with the paradox of it being another step higher, gasping for breath all the time, and you can’t sleep at night as soon as your SATS drop below 75 you wake up gasping for air, and this happens every 20 minutes.

Added to this we had no appetite from the Everest View Hotel to descending from EBC it was all I could do to eat a mars bar and drink a small bottle of Cola, a day. The morning we made for EBC I was living in my own little exhausted, sleep deprived, hungry, dehydrated and O2 diminished night mare.

We set off at 4 am to be sure to hit base camp and then make the 19 km walk down with its’ blessed drop of 800m in altitude before reaching that nights accommodation.

The smile in the photo with the UKSN flag has every ounce of energy in it, that was all I could muster!! It took us 4 days to walk back to Lukla and by the end of those 4 days I was beginning to feel like myself again, 3 days in the 4* Hotel Shanker drinking gin and patching my wounds and I was back on top form again.

My act of altruism was to take the UKSN Flag, I knew how much it would mean to Glyn and all the SN’s to have something like this in the trophy cabinet, I have a lot of the patches, Navigation, First Aid, Comms, 3 years membership coins, but I have never been to a UKSN Camp, uploaded an instructional video to You Tube, anything like that, this is partly due to time given to my ever expanding family and running my own business as well as being all the way out in South Cumbria, so thank you for giving me the UKSN Flag to take to EBC I am very proud to have taken it, even more proud to have made it to EBC. Dave and I both hope that the CV19 restrictions will lift soon and we can go and do something equally as daft and accompanied by the UKSN Flag….. which by the way I am keeping!! 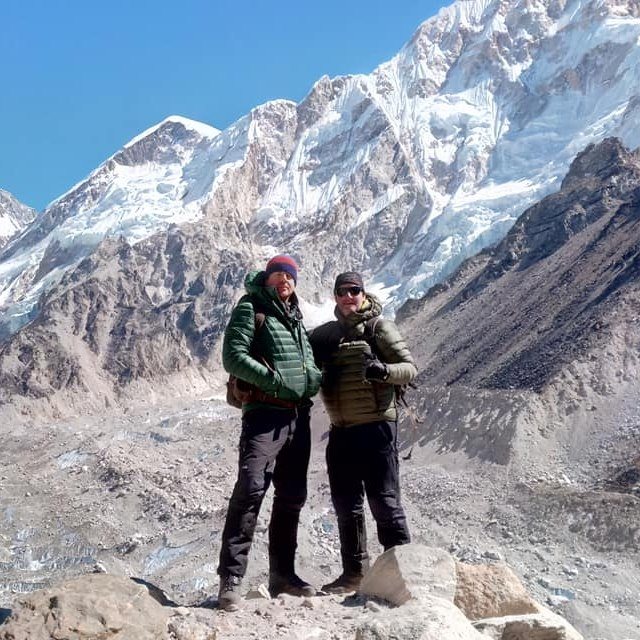 How long have you been a member of UKSN

How long have you been a member of UKSN and how did you originally stumble across us?

I have a You Tube Channel PreparedUK I think I was planning a video on something – I can’t remember what, maybe power cuts or flooding ?? I think my Google search for United Kingdom, Survival, surviving etc sent me to you and all the kindred spirits under your umbrella, I think I subbed the next morning at work.

What got you into Outdoors, Bushcraft, Survival or Prepping?

1970’s BBC TV got me into the preparedness mind set, mainly the writings of Terry Nation, along side that – the imminent threat of nuclear war!! I grew up in Bolton until the age of 7, then moved to the edge of the Lakes I remember even at that age looking into the mountains and knowing some how they were where I was supposed to be. Kayaking and Canoes were my fathers passion, I qualified as an instructor at 17 and the BCU withheld my certificate until my 18th birthday, I was gutted – my father told me they had chosen to award it to me because I was so good in a boat and such a good teacher, I joined the army at 18, left at 19 and went straight into teaching Outdoor Ed.

What are your goals for the future?

I put my You Tube Channel to bed when Issac was born in 2017 (my fourth), I didn’t have the time and although it was becoming very successful I didn’t know what to do with it, now in the midst of lock down I have started an urban allotment, I might try and go self sufficient in fruit and veg – I loved “The Good Life” as a kid – there is an influence there - and focus on this on my channel.

What outdoor / survival kit do you recommend and couldn't be without?

I am a complete kit snob, I think I am blessed with being a little bit “on the spectrum”. I can’t have kit other people have got, I like Triple Aught Designs Kit, Fjallraven are another fave, I also like Montane, UK and environmentally sensitive – but please don’t buy any…. My go to is a Camelbak Eddy – the 1.5 litre one – I have put a Sawyer mini filter in it, it’s awesome and no one else has done it – that I know of!

What is your favourite inspirational motto and why?

Ha Ha – “It will either rain or go dark before morning” – some stuff is inevitable – you just got work through it. “being cold, lost, hungry and wet – is easy, I never said it would be easy – you can have easy if you want, but I won’t be there”

We hope you enjoyed our very first community uncovered. If you are a member of the UKSN and have a story to tell, why not drop us a message? You could be featured in the very next UKSN Community Uncovered!

Please note: all responses expressed are unedited and provided to us by the UKSN Member. They may not necessarily reflect the views of UKSN.